Which Used Ford Truck is Right for Me?

Ford trucks are known for being reliable, powerful machines that are more than capable of hauling and off-roading. Whether you’re in the market for a heavy-duty work truck, all-around hauler for weekend trips, or an off-roading beast, there’s a Ford truck for you.

Of course, the real reason Ford trucks have been the best-selling vehicles in America for over 40 years isn’t their capability but their longevity. Ford trucks are known for lasting for years and maintaining their strength and comfort throughout that time. Since there are so many used Ford trucks on the market, let’s take a moment to figure out which pre-owned Ford truck is right for you. 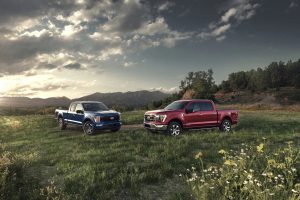 The Ford F-150 is the original Ford truck, with the F-Series pickup dating back to 1948. Beginning with the 2015 redesign, F-150s have a max trailer rating of 13,200 pounds and a max payload of 3,300 lbs, which is more than enough for pretty much anything you need to haul. Earlier models can be had for cheaper, but with lower tow ratings, so if you’re looking for a work truck, look for an F-150 newer than 2015.

Another reason you might want to go with the 2015 or newer model is that, since that year, the Ford F-150 has been ranked number 1, 2, or 3 among all full-sized pickup trucks by U.S. News! Its comfortable interior, smooth ride, and top-of-the-line towing and hauling capabilities, horsepower, fuel economy, and more are surely a big part of its appeal. 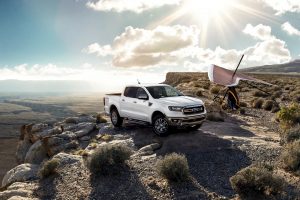 For an affordable light-duty used truck that still has a lot of bed and cab configurations, the Ford Ranger is a great choice. Look for configurations featuring two doors and a 6-foot box, a regular cab with a 7-foot box, or a SuperCab, which features an even longer bed and an extended-cab body with four doors for hauling more people and equipment.

In addition, depending on the generation of used Ranger you can find, it should be able to tow up to 6,000 pounds using a 4.0L V6 engine producing 207 hp and 238 lb-ft. of torque. And since the Ranger was a top-seller for years, there’s an abundance of parts available for fixing up your pre-owned Ford Ranger. 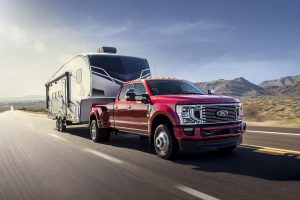 For truly heavy-duty jobs, a Ford F-250 is another great choice. The Ford F-250 became part of the Ford Super Duty line of pickups back in 1999. The third generation of F-250s, which were built from 2011 to 2016, can tow up to 24,400 lbs with a fifth-wheel hitch and feature more technology than previous models. Additionally, there is improved ride quality, cabin quietness, and fuel economy.

In 2017, the F-250 had a major redesign, with even more tech and better styling than before. Most F-250s hold their value well over time, which is great for when you’re ready to trade it in for an upgrade.

Used trucks are a great way to save money and avoid costly depreciation on a work truck or vacation hauler. With Ford’s legendary build quality and easy access to parts, you shouldn’t have trouble repairing anything that might go wrong with a used Ford truck. Plus, when you buy a Certified Pre-Owned Ford truck under the Ford Blue Advantage plan, you’ll get comprehensive warranty coverage and more peace of mind than ever before.

When you’re ready to look for your next Ford truck, come to Finnin Ford to peruse our wide inventory! We’ve got used and new Ford trucks, cars, and SUVs for any use-case, and we’re easy to get to wherever you are in the Dubuque, Iowa City, Davenport, or Moline areas! Our staff is here and ready to help answer whatever questions you may have. Come see us, give us a call, or schedule an appointment online today!

Showroom: 3600 Dodge Street Dubuque, IA 52003-5251
Although every reasonable effort has been made to ensure the accuracy of the information contained on this site, absolute accuracy cannot be guaranteed. This site, and all information and materials appearing on it, are presented to the user “as is” without warranty of any kind, either express or implied. All vehicles are subject to prior sale. Price does not include applicable tax, title, and license charges. ‡Vehicles shown at different locations are not currently in our inventory (Not in Stock) but can be made available to you at our location within a reasonable date from the time of your request, not to exceed one week.

Find Your Next Vehicle

search by model, color, options, or anything else...